Thantifaxath’s debut album, Sacred White Noise, has been in gestation for a little while now. 2011’s self-titled EP laid down an impressive gambit of discombobulating and tortuous black metal but sadly its follow-up wasn’t swift, leaving many wondering what their status was.

The band has maintained a certain level of mystique around them and this is further illustrated by the cold visuals they employ. The EP artwork was a barren black and white much like this new one too while their live performance are stark with the three members cloaked in black robes, obscuring their faces as much as possible. Thantifaxath are a band that has their entire visual and sonic aesthetic down to a fine art at this point and Sacred White Noise sees them fully come of age in the most impressive way.

Thantifaxath’s brand of black metal is jarring and discordant but still delivered with a pristine production that, rather than sap any of the vitality from the raw and chaotic emotions of the tracks, has given these compositions room to unfurl in all their might. This is especially true of the guitars.

Piercing is really the only apt word that captures the band’s grating and unforgiving sound as it manically weaves in and out of different passages. However, the band hasn’t forgotten the supreme art of mood and tone to complement the musicianship.

Much like their Toronto peers Sortilegia, Thantifaxath craft harrowing atmosphere expertly but the former focuses more on a raw traditional BM style while Thantifaxath have allowed many auxiliary elements to seep in and pepper their sound. This may be some of the other non-black metal bands that the members play in, namely TO hardcore outfit Vilipend or grungey prog band Ayahuasca, influencing Sacred White Noise. The album doesn’t take a linear path by any means, meandering and swerving around sharp corners several times in every track.

‘Where I End and the Hemlock Begins’ is the perfect representation of this, where the juddering hail of drums and scything guitars conjure up a Finnish-like vibe at first until the coarse deathly vocals enter the fray soon leading the track down a new path, where the guitars pull back the pace a little bit, hammering out passages that sound more Castevet than Behexen. 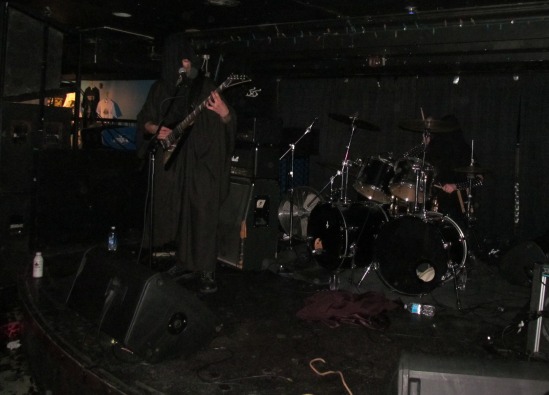 The band’s hold on dynamics and shifts has definitely taken influence from Voivod, meshing it with some classic black metal elements but all decidedly washed over with modern flairs.

‘Panic Becomes Despair’ is perhaps the album’s most ferocious outing. By this stage of the record, Thantifaxath have their MO and discordant art all firmly established so when the blistering opening riffs of this track, with its blazing classic BM riffs and drums, come barrelling in it makes for gut-wrenching reaction while the riffs soon morph into a Krallice-like maelstrom of searing tremolos but the vocals maintain the vibe.

There are many influences that can be plucked out of their album but crucially, Thantifaxath have fashioned an album that stands on its own merits rather than rehashing anything. This is particularly refreshing with many bands of late running on well-trod ground. Sacred White Noise, if anything, simply raises the bar for black metal in 2014, whether that’s orthodox black metal, old school black metal, post-BM or whatever you fancy.