Burzum will release a new album next month, continuing the trend of yearly records from Varg Vikernes since his release from prison. Sôl Austan, Mâni Vestan will be released on May 27th, through Byelobog Productions as per usual, and will be an instrumental electronic album, similar to his incarceration records in the late ‘90s.

Posting on his website, Varg described the style and concept of the album: “Sôl Austan, Mâni Vestan is, just like the other three so-called post-prison Burzum albums were, a concept album. I have still not been able to leave behind the Pagan religious-spiritual concept of a descent into darkness and the following ascend back into the light; the Pagan initiation, the elevation of man to the divine, the enlightenment of the mind, the feeding of the elven light in man.
“Being an instrumental album, and a purely electronic album too, Sôl Austan, Mâni Vestan is naturally very different from [last year’s] Umskiptar, my latest metal album. Yet again I have left behind the metal genre and have chosen a different path but for no other reason than me following my Pagan spirit willingly to wherever it takes me. This time it kindly took me to East of the Sun and West of the Moon.”
How this will hold up is anyone’s guess but the change of direction is enough to pique a few people’s interest, especially after last year’s very disappointing Umskiptar record. The artwork for the new album is below and you can check out the tracklisting HERE. 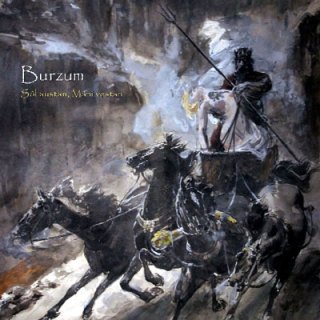 Meanwhile, something entirely different; in case you missed it, the review of KEN Mode’s new album Entrench was published this week and yesterday the band released the music video for the track ‘Counter Culture Complex’, which was premiered through Pitchfork but have a look at it below and try and figure out what’s going on it. There’s snow, fire and archery anyway.