KEN Mode have arrived. The Winnipeg hardcore outfit has been beavering away on compelling and belligerent albums for years, work that we thought reached its zenith with 2011’s striking Venerable record, an album that, at the time, was KEN Mode’s finest yet. That is until now of course. Signing with Season of Mist, Entrench not only marks a new chapter for the Canadians in regards to awareness but they have complemented it with what is their best record yet.

Enveloped in a world that is chaotic and dark, Entrench is an album that has harnessed all of KEN Mode’s established strengths, all the while finding new ones, into one single body of work that is engrossing and aggressive from beginning to end. 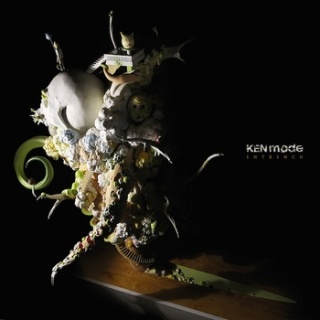 For a mere trio, KEN Mode conjure an unholy and frenzied cacophony. It’s a trait that has been a constant throughout the band’s existence, drawing the influences of Botch, Angel Hair and Converge, but on Entrench everything has been dialled up to hazardous levels. They’ve never sounded so invigorated, and just plain violent, wasting no time with first track ‘Counter Culture Complex’. It’s an easy thing to say that a band has matured on their latest album but often that might suggest that their prior material was almost juvenile, which isn’t the case in the slightest, but Entrench is the sound of a band that has fully realised what they are capable of.

Followed by the devastating one-two of ‘No, I’m In Control’ and the particularly caustic ‘Your Heartwarming Story Makes Me Sick’, KEN Mode have unleashed an unmitigated hail of corrosive hardcore in just the first three tracks. Where some bands overexert themselves and frontload albums with the most fevered tracks, Entrench is merely laying down a powerful gauntlet for things to come.

Meanwhile, the band aren’t afraid to recoil into pensive brooding dirges like the slow, hypnotic crawl of ‘Romeo Must Never Know’, which displays KEN Mode’s flair for diversity but that’s followed by the totally ruthless ‘Secret Vasectomy’ that reels things back into familiar territory. Ending with ‘Monomyth’, the band pull the curtains in mesmerising and soothing fashion with a beautiful piano and string arrangement instrumental that’s completely at odds with the overall aesthetic of KEN Mode but works a treat here.

Entrench is KEN Mode’s finest hour and one of the finest hardcore or metal records of 2013 so far.