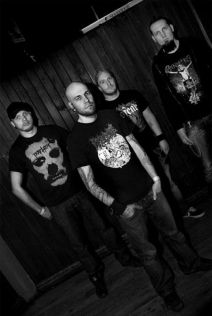 This one is coming a few days late but Rotten Sound have premiered another new song, this time via Metal Sucks. The Finnish grinders will be releasing a new EP entitled Species At War next Monday through Season of Mist and debuted a cut from it in December. The new song ‘Peace’ can be heard HERE.

The track is a blistering number, and is only what you’d expect from the band at the point. The relentless drumming really leaves behind searing mark, while Keijo Niimimaa sounds just possessed as ever. This band are on form.
Don’t forget that Rotten Sound play Dublin on March 1st, with Martyrdöd and Enabler.