If you missed Flourishing’s full length debut last year, The Sum of All Fossils, then unfortunately you missed out on the birth of something staggering. Easily one of the 2011’s most evocative death metal albums, Flourishing crafted a hail of imitable discordance and eerie melody, an impressive palate of sound created by just three men. In its wake, Flourishing then recoiled into the shadows and it was unclear what the New Yorkers’ intentions were for a new release or even what the future of the band would be. Fast forward many months to the closing weeks of 2012 and the band, on their label The Path Less Traveled, have unleashed this new short, no less redolent, EP entitled Intersubjectivity. 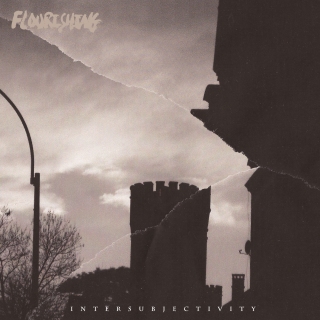 With just three tracks and 20 minutes of music, Flourishing have still fashioned a monolithic and towering record. If it was possible, the compositions have even more going on, with even more layers, than its predecessor. The production is thick with the searing guitars always complemented by the tremulous wall of bass guitar that’s constantly rumbling throughout, conjuring feelings like that of the very earth beneath you giving way.
Much like The Sum of All Fossils, Intersubjectivity is laden with a blistering uniqueness but there are still the vibrant influences of Gorguts, and even Atheist, to be found on this EP, as there was on the album. It’s not bad company to keep and the result is one of the most intriguing death metal bands of the 21st century.
Flourishing understand the key of maintaining a balance between intricate musicianship and bludgeoning dissonance, whether it’s Garrett Bussanick’s throat shredding vocals or the gentle eerie guitars that often peek through the reverberating din – just take the opening track ‘A Living Sundial’, for unavoidable proof. Meanwhile, ‘The Petrifaction Lottery’ is a shorter song, compared to the other two, and bears the most similarity with The Sum of All Fossils.
The eight minute title track, which is mostly instrumental with minimal vocal assaults, is where the three men delve into the complexity of their musicianship with a meandering track that coalesces all Flourishing’s strengths into an equally discordant and invigorating work.
Flourishing have to be one of death metal’s (if not, metal in general) most interesting and captivating bands as of this writing. However, Intersubjectivity just feels like a small cog in the much larger machine, one that begun assembly on The Sum of All Fossils (and to a lesser extent, the first EP A Momentary Sense of the Immediate World), so where Flourishing go next really is anyone’s guess.
8.5/10