Much like the Didn’t Quite Get There post from a few months, this is a re-publishing of a review that was intended for publication in Molten Magazine. Between the Buried and Me’s The Parallax II: Future Sequence was, personally, one of my most anticipated albums of the year. Scroll down and read the review below and check back later in the afternoon for an interview with Tommy Rogers that is finally being published. 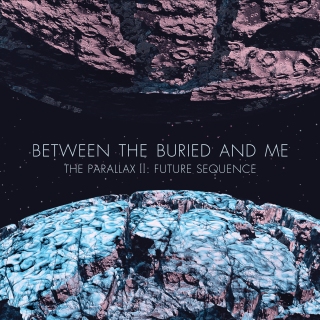 The tale of Between the Buried and Me is an ever evolving one. In fact, the band embodies much of the meaning behind musical evolution in metal and now with this, their sixth, album, The Parallax II: Future Sequence, the band has marked another overwhelming stage of evolution. Arguably the progressive metal deities of the 21st century, each of their albums have been a master class in captivating musicianship and song-craft, particularly with 2007’s game changer ‘Colors’.
Last year, these five men commenced an ambitious concept with the EP The Parallax: Hypersleep Dialogues, an introduction to this album – an epic, sprawling concept record that brings this complex tale of alternate realities to a heady climax and conclusion. This is all done so by the vibrant and stunning songs found within these vast 75 minutes.
Unusual for a BTBAM album, ‘Future Sequence’ features 12 tracks with a number of short interlude numbers clearly separating out the chapters. Of course, the album’s high points come in the form of the expansive compositions, a position the band always seem most comfortable in, whether it’s the towering ‘Extremophile Elite’ or the evocative aural vistas found within ‘Melting City’.
However, it’s the last track proper ‘Silent Flight Parliament’ that steals the show, beckoning that all-important album crescendo in ways only Between the Buried and Me can do. Tommy Rogers’ vocals shine through all else in this song, and indeed the whole album, as he screams, roars and eloquently sings us to the end.
Album of the year contender, no doubt, but that’s hardly surprising.
4.5/5