Metal Blade signing Downfall of Gaia sort of came out of nowhere. The band had been subscribing to the DIY aesthetic for many years and worked primarily with other DIT h/c labels like Alerta Antifascista and Moment of Collapse. It was these labels that released their first album Epos in 2010. Frankly, it was a mish mash of a record. The band had ideas for Epos, grand ones to say the least, but couldn’t quite implement them and ended up with some riffs and vocal styles that mirrored Alpinist a little too much and drawn out passages that shamelessly took from Fall of Efrafa. Epos was by no means bad, just a little unfocused. Those of you who listened to their split LP with In The Hearts of Emperors less than a year later then will have too been taken aback by the growth and evolution that the band has undergone. 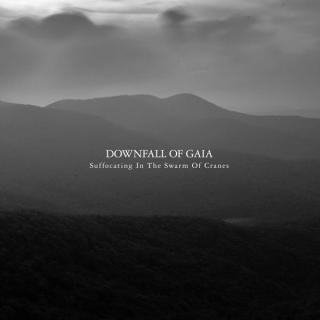 Crafting two monumental pieces clocking in over 20 minutes, Downfall of Gaia had found something that was a little more… them. With that in mind, it may very well have been that evolution that garnered more attention for these Germans that ultimately led to their signing with Metal Blade.
Suffocating in the Swarm of Cranes is the result of the band’s continued growth, a growth that has seen them eschew the crust and hardcore roots they came from in favour of a post metal sound, but one that has also allowed a strong black metal influence to permeate the record, but not that of orthodox BM. Downfall of Gaia have clearly been listening to Altar of Plagues and Krallice in the gestation of this record, more so the former. Suffocating in the Swarm of Cranes is, consciously, more emotionally intense and atmosphere driven and while not conquering the same summits as Altar of Plagues, the album displays a great deal more depth than Downfall of Gaia’s previous work.
This second full-length effort eclipses Epos in every way. It’s longer, more ambitious, more focused and the ambition and vigour is heard in each sorrow drenched note as well as the searing harmonic three way of the vocals. The split material has certainly informed the band’s decision to protract their compositions as each song is a lengthy offering with the album just shy of the one hour mark, dragging us through several peaks and troughs, like the melodic hardcore and black metal hybrid that characterises ‘Drowning by Wings Beats’ and ‘In The Rivers Bleak’.
Bleak is very much a recurring theme. A concept record about one man’s descent into insanity, Suffocating in the Swarm of Cranes is a wilfully dark and harrowing album but one that’s altogether cathartic at the same time. The 10 minute ‘I Fade Away’ is wrought with bleak beauty as the band traverse eerie melody and razor edged ferocity while instrumental closes ‘[Asphyxia]’ ends the album on a staggering note, suitably rounding off Downfall of Gaia’s next step in their stunning ascent.
8/10