Releases
“I realised what sort of a monster I had become.” That’s the chilling line from Peter Sutcliffe’s confession statement to police in 1981, the man better known as The Yorkshire Ripper, the man that terrorised a community for over a decade, killing 13 innocent women, traumatising families and leaving a permanent stain on England’s justice system. That particular quote is taken from Sutcliffe’s account of the murder of his fifth victim, 16-year-old Jayne McDonald, the youngest of his victims and despite his confession of being a “monster” after finally being caught, the truth is Jayne was not his last victim as he would murder eight more women and hold a death grip of terror over northern England for another three years. 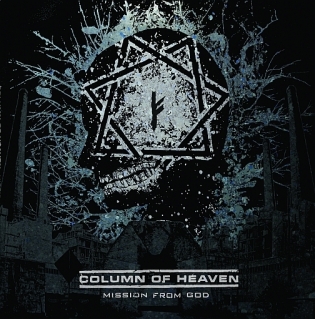 It is this monstrous man that informs Column of Heaven’s LP Mission From God, a truly harrowing title given that Sutcliffe believed that he was in fact on a mission from god, with god’s voice in his head instructing him on his vile, misogynistic killing spree. Members Andrew Nolan and Kristiansen grew in up the area terrorised by Sutcliffe so the LP isn’t some pastiche attempt to shock, rather an account of traumatic events that were happening next door, and broadly speaking the record is about “how the physical and social landscape shapes us”, according to a blog post from the band.
When powerviolence mainstays The Endless Blockade ceased existence, bowing out with last year’s invigorating split 7” with Pig Heart Transplant, Nolan and Eric King took up Column of Heaven, having previously released a demo, and the result is this chilling, simply fucking torturous LP. This is powerviolence taken to a completely new level by a band that while still young in the sense that they only formed in recent years, the prior tenure of The Endless Blockade still looms and brings with it a seasoned experience that has allowed Column of Heaven to ascend to a level previously unoccupied. Storming the gates with an aggression unparalleled, this record is so short (at 17 minutes) but captures so much intensity. Its intensity only matched by the gravity of the subject matter, both being heavy and fierce in unfathomable ways.
The first and last songs are ‘After The Mission’ and ‘Before The Mission’, respectively, which suggests that the LP moves back over the events from 1981 to 1969 but the album closes with an audio sample from a phone interview Sutcliffe gave from prison detailing his suicide attempt long before he first took a life. Deep confusion and incompetence surrounded the police investigation and perhaps this arrangement of tracks is meant to represent that.
Concept or no, Mission From God stands up as an evocatively devastating album but it’s hard to separate the two with the barbarity of the music from the tales it tells. The mesh of grind, powerviolence and molesting noise elements has bred a terrifying beast known now as Column of Heaven.
8/10
Stream the full album HERE and buy the LP HERE.