News
The line-up for Dublin’s FilthFest 2012 has been announced, with Germany’s Instinct of Survival as headliners. This will be the German crust band’s first Irish show and they’re joined by UK hardcore mob Freebase. Like last year, the rest of the bill is packed out by the filthiest this island can offer – Coldwar, Twisted Mass, Bacchus, Putrefaction and ZOM. This year appears to be just a one day affair opposed to last year’s two dayer with Doom and Wormrot headlining. Nonetheless, this year’s filth will amass on September 8th in The Pint (of course), it’s €10 in and will have the usual stalls and BBQ. Here’s the blurb for the show and the poster below and some more info HERE.
“This will be Germany’s Sons of Stench Crust Instinct of Survival’s first trip to Ireland and a must for fans of Deviated Instinct mixed with early BoltThrower. This year also sees the return of the legendary UKHC Terrorists Freebase now made up of 2 original members Mark (Vox) and Nick (Guitar) they have drafted in the talents of Ian Glasper (Stampin’ Ground) on Bass and Ade Stokes (Stampin’ Ground) on Drums and Ryan (Assert) on Guitar, a new 7″ and demo comp cd are out now.” 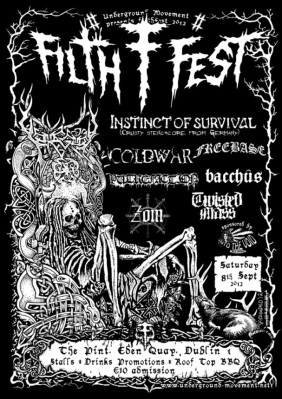