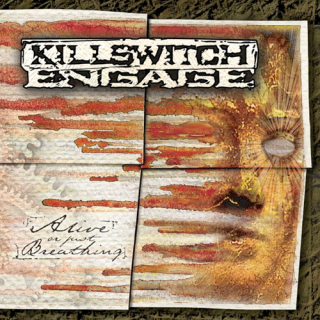 Killswitch Engage have made plenty of headlines in the first few months of 2012. Long-time vocalist Howard Jones left the band after almost 10 years of service, and in the following months the inevitable happened and original vocalist, Jesse Leach, the lungs behind Alive of Just Breathing, re-joined the band. There’s a poetic sense of coming full circle writing this. Next month marks the tenth anniversary of Alive or Just Breathing, an important and influential record, whichever way you slice it. Now, Jesse is back in the fold, and re-debuted with the band live last weekend. It seems fitting that the tenth birthday of the album is coupled with the return of Killswitch’s prodigal son.
As stated, Alive or Just Breathing was, and is, an important record. It was an album that kick-started the entire modern American metal wave of bands, like Unearth and All That Remains, and while those bands have their own place, good, bad or indifferent, there’s no comparison to Killswitch Engage. Prior to 2002, KSE had released one album, the self-titled, on Ferret Records, as a four-piece. Adam D was still on drums and it was the first time we truly heard the primal fierceness of Jesse Leach, previous work with Corrin and Nothing Stays Gold just didn’t hack it, but he came out of his shell on the self-titled. Listen to the raw and primeval ‘Soilborn’ and the original recording of ‘Temple From Within’ for proof.
Born from the ashes of Overcast and Aftershock, and the 90s hardcore scene of Boston in general, Killswitch drew all these influences into that record and when it came time to record Alive or Just Breathing, these influences had multiplied with greater measures of metal and even more melody. The Gothenburg melodic death metal of At The Gates, Dark Tranquillity and In Flames added another dimension to the band. This started a new surge of metalcore, more so of what we know metalcore to be now; of course, metalcore existed long before that. Alive or Just Breathing on the other hand started a whole new chapter, both loved and maligned.
I have my own personal affinity for this record. I was 11 years old when it came out, pretty young I feel for being exposed to it. It was by accident that I saw the video for ‘My Last Serenade’, arguably the album’s centrepiece, and it blew me away. I was just getting into metal, and very slowly getting into it at that, having only just bought my first Metallica and Iron Maiden albums as well as some other albums that I just can’t bring myself to admit to having bought. But I had never heard anything like ‘My Last Serenade’ before, of course I hadn’t. At the time, I found it difficult to comprehend the emotion and raw beauty behind Jesse’s voice in the chorus and as for his crushing bark in the verses, well that was completely new to me.
Several months passed and I finally bought the CD – Alive or Just Breathing. First off, the title grabbed me. It had so many connotations for my wee mind, what did it truly mean? And when I put that CD into my stereo and the intro of ‘Numbered Days’ kicked in, something definitely clicked with me. Again, I’d never heard anything like this before. It was heavier than anything I knew of and most importantly, impassioned – both in the melodic riffs and Jesse’s affecting vocals.
‘Just Barely Breathing’ is one of those goosebumps moments, an experience repeated throughout the record. ‘The Element of One’ is by far the album’s most melodic number and laid some groundwork for tracks in the future like ‘The End of Heartache’ and ‘The Arms of Sorrow’.  While songs like ‘Temple from the Within’ and ‘Rise Inside’ recalled their aggressive side back into the fray.
A lot has happened since Alive or Just Breathing came out. Jesse left the band, Howard Jones came in and stayed for nearly 10 years, and for three albums, the first of which being The End of Heartache, arguably as stunning as Alive or Just Breathing, and now Jesse is back. AOJB spawned a million and one copycat bands, all under the metalcore banner, a subgenre that has since meandered into atrocious and abysmal territory. Like any new movement, it has its resilient ones and some bands remain and others were a flash in the pan. Killswitch Engage, who formed in 1999, remain and while the direction they’ve gone since The End of Heartache has divided fans, their influence and importance remains intact. It’s difficult to imagine how modern metal would have been moulded in their absence. Ten years on from their breakthrough moment, the band is rejuvenated and must assert once again that importance with their sixth album. Several months ago, before any news of Howard’s departure, I posted an entryhere stating that Killswitch need to make a darker, more abrasive, edgier album than ever before, and I firmly believe that they’ll go that way. The clips of last weekend where they played their first show back with Jesse Leach, fittingly at The New England Metal & Hardcore fest, showed a raw energy not seen from them for some time.