News
Yesterday, Irish hardcore made national headlines. Printed on the side column of the front page of The Irish Daily Star (with the full story inside) and in an article on the Irish Independent’s website was everyone’s favourite misanthropic hardcore noiseniks Crows. Why you ask? It’s all because of their new t-shirt, which has got some people talking. 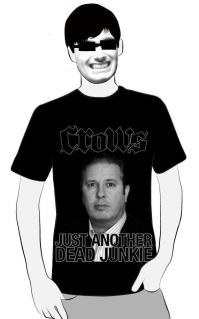 Crows’ Joe Breaker said the t-shirt made a “legitimate point” about Gerry Ryan’s drug abuse while maintaining an anti-drugs stance. “It might be putting salt in their [Ryan’s family] wounds, but the information is not new, it’s been well documented in the media,” he also stated.
Here’s the front page from yesterday’s Star. What do you think? Crows will have a few words on Drop-d later in the morning.