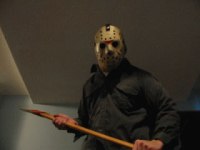 If you don’t have Deathspell Omega in your life at this stage, rectify it immediately. Their metaphysical trilogy of records, which critiques the relationships between God, Satan and Man, are wholly immense and breath-taking pieces of work. The trilogy was completed with last year’s Paracletus album from which we take this number – ‘Phosphene’. The French outfit truly brought black metal to unchartered waters and the sinister anonymity that the band maintain several years on from their first album only accentuates the impiety.
Gnaw Their Tongues is a black metal imbued noise project helmed by Frenchman Mories, and recently has enjoyed some critical acclaim in the underground, particularly with 2009’s album All The Dread Magnificence of Perversity. However, it’s his first album 2006’s Spit at Me and Wreak Havoc on My Flesh that we explore for Days of Halloween, an album that was only re-issued in recent months.