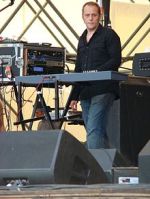 Keyboardist, Les Smith has left UK prog rock band Anathema due to creative and musical differences after ten years with the band. The band issued the following statement:
“It is with regret and sadness that Anathema announce they have parted company with keyboardist Les Smith due to creative and musical differences.
All of us including Les tried our best to make the partnership work for many years through hard work together, but it was felt there was always a difficulty and the creative process was just not working. Sadly the split was inevitable.
Great respect and thanks is due to Les for all his tireless work behind the scenes for the band. It has been a very difficult few months for everyone concerned as Les is a unique character and is still much loved by all in the band. You will have noticed that Daniel Cardoso has been performing in concerts over the festival season as a live player, but the writing and recording line up will remain the nucleus of the band as it always was.
We all wish Les the very, very best for the future.”
The band this week released their Falling Deeper project; a review will be online in the coming days.