As part of Decibel’s Flexi-disc series, New York’s often-divisive avant black metallers Krallice have covered Rorschach’s ‘Traditional’ from their seminal 1993 record, Protestant. The most notable difference in the cover is obviously the production. Protestant was an album characterised by a metallic hardcore rawness that reflected the time and situations that it was recorded. Meanwhile, Krallice, as shown on their three jaw-dropping albums to date, have a slick and much layered production, such sheen is required for their dynamic sound. Otherwise, the cover stays, essentially, true to the original. Mick Barr’s vocals have a distinctness of their own that retains the Krallice sound the riffs of the original haven’t been tampered with.

Listen to it right here: 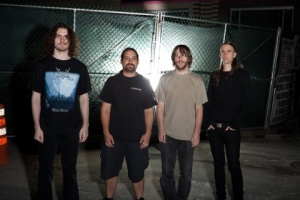