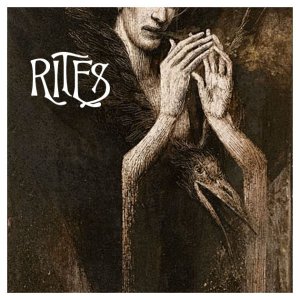 Galway’s Rites have been whittling away at this EP for some time, and finally their sludging assault has been committed to a 12” vinyl, encased in this imposing artwork, a fragment of Santiago Caruso’s Sandman. The sleeve in your hands creates a vibe straight away for the record, but visual aesthetics are one thing. So it’s particularly pleasing to find that the music held within is more than meeting of expectations. The multi-faceted but somewhat downcast doom/sludge is remarkable in its guttural punishment.

There are riffs that move at a glacier’s pace, slowly marching along in a crushing and mauling manner. But then the clamour can give way to a volatile offensive of riffs. The whole sound and vibe of the record is an exhilarating one, set from opening barrage of the intro track before the sizzling into, particular highlight, ‘Vessel’. Then, ‘Plastic Lung’ spends its seven and a half minutes slowly pummelling, until the bile soaked vocals enter.

The vocals of the EP are scant throughout. This is an effort very much focussed on the riff, but when those biting, ripping vocals do pervade the din, they add a new texture to the cacophony that’s wholly embellishing, adding new dimensions each time. The thick, dense bass also adds more and more layers to the sound.

Production wise, the record has a slick feel to a degree but none of the grit has been lost and or any jagged edges filed down. Thankfully. Then again, the band did record with James Eager at The Hive Studios, who hasn’t really been putting a foot wrong at all lately.

‘Forging’ heaves with plate shifting heaviness and more of those sickly vocals, meanwhile, ‘Iron Shrimp’ appropriately winds down the record, first commencing with a vast, striking riff before trekking through more ominous passages. This whole effort is simply doom laden, sludgy brilliance but with an affinity for hardcore and crust that’s hard to avoid. All this is flung into this one 27 minute long melting pot of dirty noise, and it’s beautiful altogether.