This marks merely the second post of 2011 on The Grind That Annoys and it’s only appropriate that we get things rolling with a quick look at some of the latest goings-on with regards to upcoming releases and some new tracks that have surfaced online.

Firstly, acoustic singer/song writer Owensie has announced an album launch show for his album, Aliens on January 21st in The Back Loft, La Cathedral Studios. Also playing is Amber Wilson as well as a solo set by Enemies’ Eoin Whitfield.

Instrumentalists Halcyon are preparing the release of their new EP, Pastures and have released a five minute teaser clip on their Soundcloud page, HERE. They were included on the recent Honor Thy Drummer tribute compilation to Mike Portnoy.

Refraction have announced an album launch show on March 4th in Fibbers with a line up that also includes Parhelia, I’ll Eat Your Face, Countervela and Ropemaker. You can listen to two tracks, ‘Into Nothing’ and ‘The Final Shadow’, from the forthcoming record, HERE.

Finch have broken up once again, originally parting ways in 2006. The break up came not long after the sublime Say Hello To Sunshine record, which was actually a commercial failure and saw them leave their home on Geffen records. They reformed than in 2007 releasing a new EP and sporadically dropping new tracks for a new record. Much of the new material was conspicuously more in the vein of their original post-hardcore and somewhat pop punk material opposed to the schizophrenic experimentation of Say Hello…. 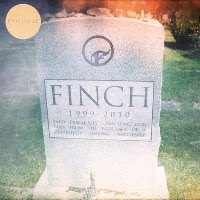 Their second curtain call has come in shape of a brief EP Epilogue, which is available digitally on their bandcamp. It features two tracks and comes with the note; “these are the last two Finch songs. ever. enjoy.” Also released has been a cover of Far’s ‘Bury White’.

Nottingham based badgers Alright The Captain have finally scheduled a release for their debut full length, Snib for February 7th.

Two Tales Of Woe have a clip of rough new material too and can be heard HERE. They will be supporting Entombed on January 29th in The Village. Dublin post rock band Friend? have also a very brief clip of their EP, still a work in progress, available on their soundcloud.