Former Saint Vitus drummer Armando Acosta has passed away, it has been confirmed. He was 58. Saint Vitus management confirmed Acosta died on Thursday November 25th, Thanksgiving.

Doom metal pionners Saint Vitus released this statement on the death of their former sticksman:
“It is with great regret that we announce a great loss to the world of heavy metal with the passing of former Saint Vitus drummer Armando Acosta.

“Armando had been struggling with health issues over the years but came back into the Vitus fold for one last hurrah by headlining Roadburn [festival in Tilburg, Holland] in 2009 and playing a handful of European dates directly after the festival.

“Henry Vasquez replaced Armando Acosta in 2009, making his debut on the main stage at Hellfest [in Clisson, France].

“The December 2010 Saint Vitus tour will be dedicated to our old friend, Armando Acosta. 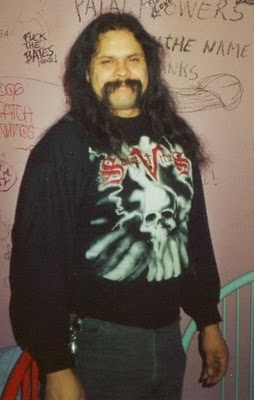