Ladies and Gents, this is the first post of 2010 and the return of New tracks round up. There’s no better way to kick this year off than having a quick a look at the sneak peaks we have for the mass of new music coming our way this year.

Ihsahn – The Barren Lands
Ihsahn’s third solo effort, After is growing closer and closer each day. “The Barren Lands” is another taster of the album following the monstrous “Frozen Lakes On Mars”. This track is akin to its predecessor in its lofty zenith of quality. It’s replete with razor edged riffs and Ihsahn’s trademark snarl but still that sophisticated progressive surge that has made Ihsahn’s solo work so enthralling.

Annotations Of An Autopsy – Cryogenica
One of the young UK death metal scene leaders Annotations Of An Autopsy are set to release their second album, II: The Reign Of Darkness on January 18th, the follow up to Before The Throne Of Infection. AOAA have fallen under scrutiny from death purists but have since persisted with the craft. If “Cryogenica” is indicative of The Reign Of Darkness’s direction then many a mouth will be shut, it makes its intentions vividly clear with no time to waste – cut throat and heavy as tits.

The band have also proved they have potentially much longevity by catching the attention Hate Eternal’s Erik Rutan (and producer) who has mixed the record and guests on the track “Bone Crown” on the record.
Listen to the track on the band’s myspace HERE.

The Empire Shall Fall
At the tail end of 2009 former Killswitch Engage vocalist Jesse Leach returned with a new band, The Empire Shall Fall, a much heavier and vicious entity than previous band Seemless. The band released their debut album Awaken, and is streaming entirely on the their myspace HERE. The material marks a return to Leach’s sorely missed scream but still retaining his blissfully clean vocals, complementing each wonderfully, almost to the extent that Alive Or Just Breathing did. The Empire Shall Fall are certainly worth keeping an eye on as with new label deals beckoning the name will be popping up again very soon. 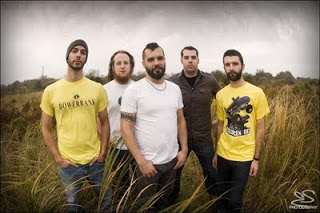