2009 marks the fifth anniversary of the tragic murder of Pantera/Damageplan guitarist Dimebag Darrell Abbott, one of metal’s most beloved figures. The eulogies have been seemingly non stop since that horrific night on December 8th 2004 and here, five years on it’s only appropriate that the biggest, most lavish honour is to be paid, thanks to Metal Hammer magazine. 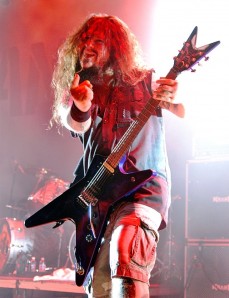 Assembled here are some of the most formidable metal acts of the current era, all hammering out their renditions of classic Pantera tunes with the intent of raising another glass to Dime.

This tribute begins in an initially odd sombre fashion, but considering the vibe of the tune and the homage it seems fitting. Zakk Wylde plays out the grave and harrowing “Suicide Note Pt.!1”. Wylde tenders an unusually deviating and extended version but still replete with its poignancy.

There’s then a drastic shift to Pantera’s mega anthem “Fucking Hostile” beaten out by Machine Head, which is drenched in an even more punky vigour. But strangely Robb Flynn’s vocals see a cleaner production, all abounding with some graciously heavier guitar work. Avenged Sevenfold rendition of “Walk” returns here too, remaining the same basic cover.

But upping the eminence, UK metal upstarts Malefice groove fearlessly through one of Pantera’s ultimate staples, “I’m Broken”. But then there’s another shift, this in the way of further calamity. Evile’s contribution to this tribute is outright bitter sweet, as their covering of “Cemetery Gates” is the last recording the band ever made with bassist Mike Alexander who tragically passed away this year. The song is strangely prophetic considering its air and here it serves as not only a remembrance of Dime, but Mike too.

Pretty much each track here is one of Pantera’s most lauded, like “Mouth For War”, duplicated by Biohazard. Chimaira run through “Slaughtered”, with Mark Hunter conveying an odd vocal delivery. Their peers in Unearth then pleasing thunder through “Sandblasted Skin”, the closer of the wholly underrated The Great Southern Trendkill. Throwdown, who’ve resorted to plenty of Pantera worship in recent efforts also snuggle up nicely in the collection with their cover of “Becoming”.

This Is Hell, covering “Rise” provides some welcome change, showing that Pantera weren’t just massively influential to metalheads but formulated effects in hardcore circles too. The Long Island hardcore noiseniks fearlessly meddle with the tune, putting their own spin on it.

While some renditions are underwhelming like Kiuas thrashing through “This Love” feeling somewhat lacklustre, this tribute CD is a fitting commemoration to one of metal’s most sorely missed players.