First band, the London based Mutant deliver some fun thrashing ushering in a good time vibe. Most of their songs sound the same but still satisfy somewhat with some nice riffing and few decent solos.

Despite having little of the crowd on their side young death metallers Trigger The Bloodshed still fucking slay. With a 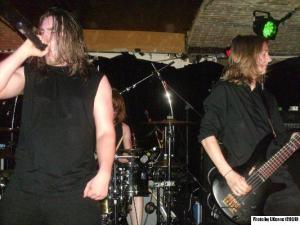 quality new album just out nothing else would be acceptable. The new tracks pound Fibbers and those at the front are subjected to neck breaking riffs and roars of devastating numbers like “Terminus” and the title track “The Great Depression”. New vocalist Jonny Burgan carries out songs from their first album Purgation immaculately, if not better – “Retribution” and the simply killer “Laceration” being prime examples. One of the most impressive elements of Trigger The Bloodshed is the drumming. The near unholy blastbeats of Max Blunos sound amazing on record but the question is can he pull them off live and the answer is yes and then some. Tonight Trigger The Bloodshed reminded us all why they’re one of the most exciting young death metal bands on the go today.

The turnout for Evile is quite remarkable; after all AC/DC were playing the same night! Taking to the stage, they are greeted a finally filled floor – they open with “We Who Are About To Die”.

The Huddersfield based outfit peel off thrash track after thrash track showing no signs of letting up. They maintain a level of energy and intensity through out, front man Matt Drake in particular who just seems to be loving every moment of this gig, especially when blasting out the likes of “Thrasher” and “Bathed In Blood

”. Meanwhile “Armoured Assault” and “Killer From The Deep” snap a few necks. There’s little in the way of moshing but the headbanging from those on hands stay constant from start to finish. The crowd still lap all the thrash up.

They play with a lot of vigour at a headline show, considering they have only one album of material to play from. However they treat the fans on hand to two new songs, “Demolition” and an as yet untitled and uncompleted song; they sound well and fit in nicely in with the rest of the set.

Closing with “Enter The Grave” and an encore of “Schizophrenia” Evile sate the appetites for some speed of the fans present, bring on the new album is the only thing left to say!