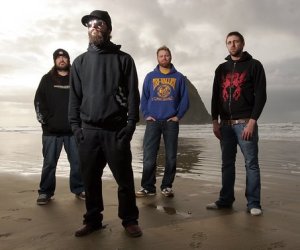 The rightful kings, 36 Crazyfists. It’s heartbreaking at times to see that this band isn’t as successful as they should be. If this were a just world they’d be in the position of the likes of Avenged Sevenfold.

It can be argued that their music is conventional, but if there ever was a band to embody simple but effective it’s 36 Crazyfists. Take “Turn To Ashes” for example from second album Bitterness The Star. Here, the verses are more or less mellow with a very nice bass line and then the pre-chorus and chorus hits you like a ton of bricks. Lead single “Slit Wrist Theory” is the anthemic number with a chorus that painlessly lodges itself in your head.

They’re a band that has literally gotten better on every album. The quality of third and fourth albums A Snow Capped Romance and Rest Inside The Flames are proof. Just listen to the songs. “At The End Of August” and “Bloodwork” will stick with you like a virus with the same being said for “I’ll Go Until My Heart Stops” and the lovelorn “Felt Through A Phone Line”.

But now fifth album The Tide And Its Takers tops all this. Opener “The All Night Lights” at first pounds you to the ground and then has you singing along. The low then loud “The Back Harlow Road” would trigger a sing-along in anyone. “Only A Year Or So” is heart wrenching passion committed to audio. The contrasting male and female narratives on absence due to war accompanied by Brock Lindow’s most passionately charged vocals to date are wholly astounding. But by the following “Absent Are The Saints” you’re floored.

The catchy riffing of “When Distance Is The Closest Reminder” is a testament to guitarist Steve Holt’s ability. Finally the acoustic title track is just plain beautiful.

Soon justice will be served, hopefully.

*Their first album In The Skin was self financed and little is known about it or its availability.

Recommended album: The Tide And Its Takers