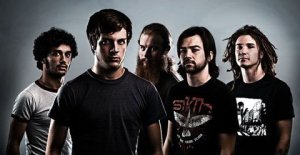 In two albums, Canadian tech-wizards Protest The Hero have set an impressive reputation for themselves in some circles but still remain in much obscurity as far as coverage is concerned.

First album Kezia, a concept record telling the story of a young woman named Kezia (who’s been sentenced to death) a prison guard and a priest and the characteristics of these characters represent traits in the band members. The full story is still shrouded in mystery.

But it isn’t the story which makes the album so impressive, it’s the extraordinary musicianship. Opener “No Stars Over Bethlehem” indicates this clearly as you are quite rapidly greeted with one neck rupturing fast riff. Roddy Walker’s vocals have been known to split opinion; many ignorant fucks labelling them “not metal enough”. However one can easily see the staggering range he has, “Divinity Within” being a prime example.

Special mention must be given to the guitarists Tim Millar, Luke Hoskin and bassist Arif Mirabdolbaghi. The fluidity and clarity of their playing is remarkable. This accompanied by the velocity of drummer Moe Carlson creates an astonishing symphony of technicality – just listen to “Blindfolds Aside”, “Heretics & Killers” or “Turn Soonest To The Sea” to name a few if you need proof.

After much touring, early last year PTH released their second album Fortress. A concept album of the sorts, Fortress didn’t stick rigidly to one story like that on Kezia. It tackled many varying themes from Irish mythology to Genghis Khan. First track “Bloodmeat”, again immediately opens with striking Dillinger/mathcore-esque playing. Musically they earn their stripes here while Walker’s vocals, again mounts over all else. The song continues into “The Dissentience”, another track where Walker’s voice soars.

Top to bottom Fortress is a jaw dropping affair, surpassing Kezia tenfold, whether it’s the thunderous “Sequoia Throne” and “Palms Read” or the impressive fret bothering of “Wretch”. Then, come closing tracks “Goddess Bound” and Goddess Gagged” Protest The Hero have proved their worth. Each member brings a different class of virtuosity to their song writing.

With only being two albums in, the future looks bright for Protest The Hero.